The changes to Bangkok's urbanization appeared after the Bowring Treaty came into effect. Significant articles in the Treaty impacted the prosperity of the Bangkok port, the exportation of crops, and the expansion of cultivated agricultural fields. Additionally, the Treaty provisions affected two kinds of Bangkok transformations, the urban landscape and the municipal administration. The physical urban change was most likely transformed when the Europeans and their subjects settled in southern Bangkok, which caused a change to the municipal form and fimction thereafter. Bangkok had to face many new problems involving surveillance, sanitation, public health, and public works at the beginning of twentieth century; among these new difficulties, the new inhabitants played crucial roles for the betterment of services of municipal management. As a result, Bangkok formulated new terms of municipality and established several new governing bodies to tackle all these challenges. In addition, in the process of the changes and transformations in Bangkok, the root idea of local self-governing in Siam was planted. 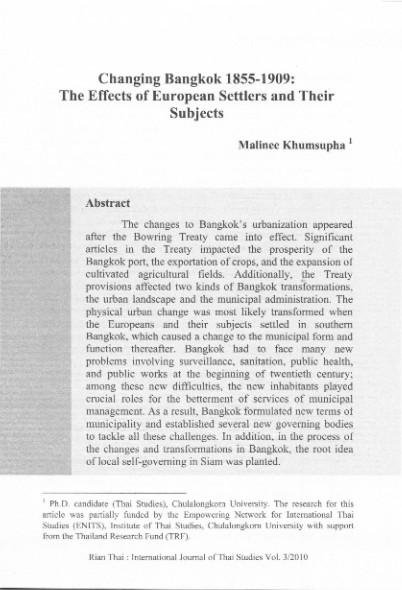