In the mid 1930s, a violin player named Abu Qasim from Langkawi Island in Malaya arrived in a small fishing community on Lanta Island in southwest Thailand and taught a local community to play a social dance music he called rong ngeng. A couple of years later, a young woman named Bunga returned home to Lanta, also from Langkawi, and became the village's first rong ngeng dance teacher. From this confluence of music and dance emerged traveling troupes of local performers that propagated the form throughout the region-from Phuket to Satun-where it flourished for decades as a popular medium for social entertainment among Malay- and Thai-speaking communities.

Using oral accounts from some of its earliest practitioners, this article looks at rong ngeng's place in the Andaman Coast society in the context of major socioeconomic and political changes that were occurring in the region, and uncovers unwritten histories of the individuals that built its first communities. 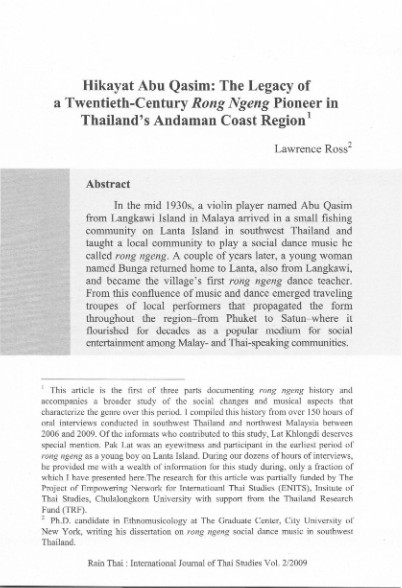