The story of "Samlor-Nang Upiam" [สามลอ-นางอุเปี่ยม] is well known among the Shan ethnic group in Shan State of Myanmar. It appears in many forms and has been continually reproduce~. This piece of literature seems to be highly acclaimed among the people reflecting their united attempt and intention to make this literature widespread throughout the Shan State. The purpose of this article is to analyze the meaning, role and existence of this literary work in Shan State, Myanmar. The researcher used a mixed method of research by conducting docum,ent research and a field study in five areas, Tachilek [ท่าขี้เหล็ก], Taunggyi [ตองจี], Mueang Kueng [เมืองกึ๋ง], Chiang Tong [เชียงทอง] and Muche-Narnkham [หมู่เจ่-น้ำคำ] with five sample groups (religious leaders, village leaders, villagers, artists, owners of bookshops, as well as entertainment media) for a total of 75 in-depth interviews.

Data was collected through observation and interviews as well. The analysis was based on theories of folklore, sociology and anthropology in order to investigate the meaning of existence in the social context of this literary work. The result showed that besides its value and role as an aesthetic media, stimulating the people's consciousness in terms of ethnic, sacred space and cultural tourism, this literary work, Sam/or-Nang Upiam, also serves as a tool for social discourse that is reproduced and passed on by the Shan leaders comprising monks, artists and leaders of the Shan State Army, to define their identity or existence and space during rule of the Burmese Military Government. 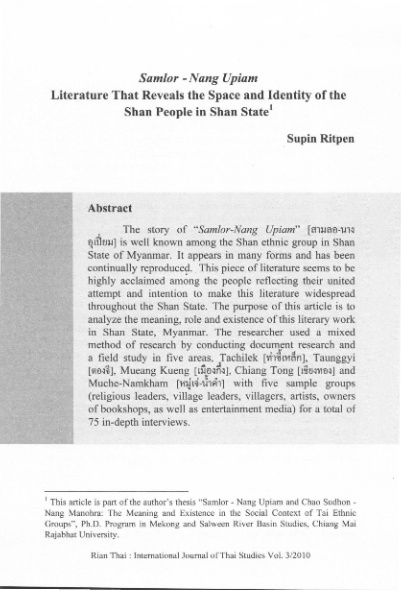