The idea of the Thonburi kingdom as a political group has been a matter of consensus amongst historians. Most previous studies on the Thonburi period are based on a framework of politics, emphasizing the conflict between King Taksin and King Rama I of the Bangkok era. Based on such a framework, scholars have tended to conclude that Thonburi's status was not as a kingdom, but as a political group.

The period between the mid-eighteenth and nineteenth century was an era of dynamic commercial expansion in Southeast Asia. The major factor for this phenomenon was the expansion of Chinese commerce. It was also a peak period of Chinese migration into Southeast Asia. Largely influenced by the economic growth of China, there emerged three prominent political and economic centers in mainland Southeast Asia: Thonburi-Bangkok, Saigon, and Yangon. This research aims to determine the emergence of the Thonburi kingdom in the context of Chinese trade.

This article reexamines the history of the Thonburi period under the argument that the Thonburi kingdom emerged and gained significant economic strength from her proximity to a booming China. Taksin, the half-Teochiu King, took advantage of the increasing maritime trade by seizing an important port emporium and creating a commercial network from the Chao Phraya Delta to the Gulf of Siam. The profit from the junk trade became the main revenue which helped King Taksin expand his territory, population, and productive capacity within a relatively short period. 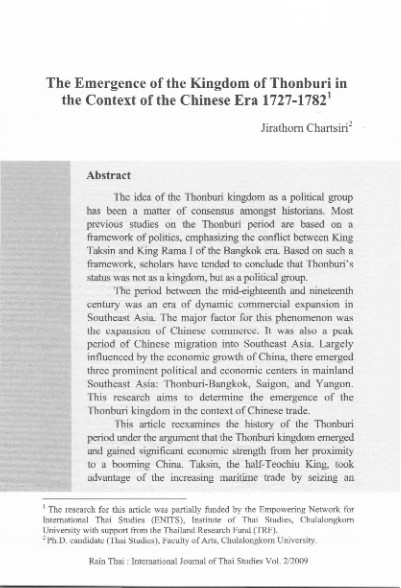