This paper is a study of a Thai play The Princess of Saenwi, written by Luang Wichitwathakam in B.E. 2481. The play portrays a tragic romance between a Shan princess and a Thai prince of two ancient states: Saenwi and Khemarat.

The story tells of a romance set in the exotic past, ending with the death of the two lovers whose love is destroyed by the political conflict of the states. Although the content of the play conveys the power of true love leading to the sacrifice of one's self, the hidden 'message' is the greater power of 'patriotism' or love for one's nation. The Shan princess refuses to give up her country, even to her most beloved prince, and is willing to die proudly protecting her country.

The play, with its lyrical songs about love and patriotism, was very popular in Thailand around B.E. 2500. The lyrics from the play were widely sung and remembered, even among those who did not have the opportunity to see the play. The writer, Luang Wichitwathakam, stated in the preface that the play was intended to illustrate eternal love and friendship between Thai and Shan people, as they all, in fact, share the same Tai cultural heritage. Seen in this light, the play belongs to a special 'genre' of literary works of that period propagating 'patriotism' and 'pride' of Thai-Tai people. The reference to the Shan state and the 'passionate' and 'courageous' characters of the Shan princess clearly reflect the 'image' of the Shan in the mind of Thais.

The Princess of Saenwi could be seen as a 'representation of Shanness' in the Thai perception. This can also be traced in the Shan characters in the contemporary novel by Krisana Asoksin, Khun Ho Kham. As a 'literary work' the play is a crystallization of the mutual acceptance and admiration of Thai-Tai culture in these modem times. 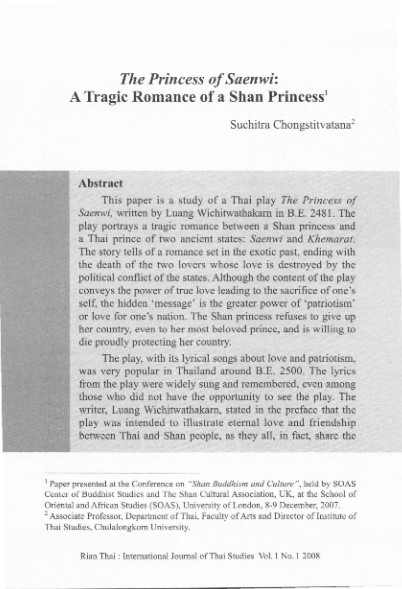