The Cold War in Southeast Asia is best understood as a battle for ideological hegemony in an era of decolonization. Successful projections of American power, therefore, could not only be opposed to communism, but also had to establish the idea of harmony between the interests of the United States and the developing world. It was for this reason that Thailand became a central location in the assertion of U.S. power in Southeast Asia. As the only country in the region to have remained free from imperial occupation, American popular culture repeatedly emphasised Thailand’s unique status, claiming that the country had survived the colonial period with much of its traditional identity intact. Yet, invariably, this image served to reproduce American ideology, familiarising the American public with a view of Thailand that made sense to their notion of the world in the context of the Cold War. This also presented Thailand as a safe and hospitable location, where Asia could be imagined as untroubled with American involvement, and where the Cold War could ultimately be won. Drawing from a range of American travel writing, articles and films from the 1950s, this article establishes how Thailand was successfully produced as an ideal location from which Americans might establish a ‘free world’ ideology. 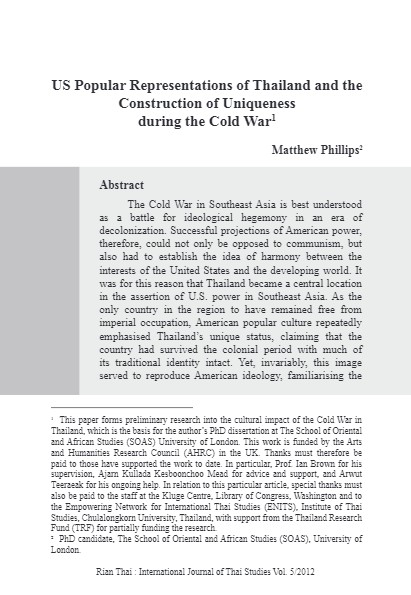