Nora Rong Khru is regarded as a significant ritual for southern Thai people, especially for ones who believe that they belong to Nora’s lineage or who consider Nora as their ancestor. This ritual has persisted not only in the southern part of Thailand, but also among the Siamese communities in the northern states of Malaysia, i.e., Kelantan, Perlis, Kedah and Perak. The forefathers of almost all the Siamese people now living in Syburi (Kedah) moved from Phatthalung, Nakhon Sri Thammarat and Songkhla to Syburi before it was colonized by United Kingdom and subsequently becoming one of the Malaysian states. The Siamese nowadays still live their lives, use Thai language and keep Southern Thai traditions as when the area used to be in the Southern part of Thai territory.

This article aims at examining the Nora Rong Khru ritual in Ban Plairamai (Kg. Titi Akar), Pendang, Kedah, Malaysia. The findings from the fieldwork that was conduced show there are two kinds of Nora Rong Khru: the “vow fulfillment” Nora ritual and the Nora topknot-cutting initiation rite for Nora performers. This article argues that the performance of Nora Rong Khru Ritual in Ban Plairamai has the following roles: 1) preserving and transmitting Siamese cultural identity in Malaysia’s multicultural society; 2) strengthening and uniting Siamese Thai people and their community; 3) providing spiritual security and support for the people; and 4) providing entertainment. In addition, this study can be perceived as cultural evidence of Siamese people in a multi-cultural society in a Thai-Malaysian trans-border and trans-national context. 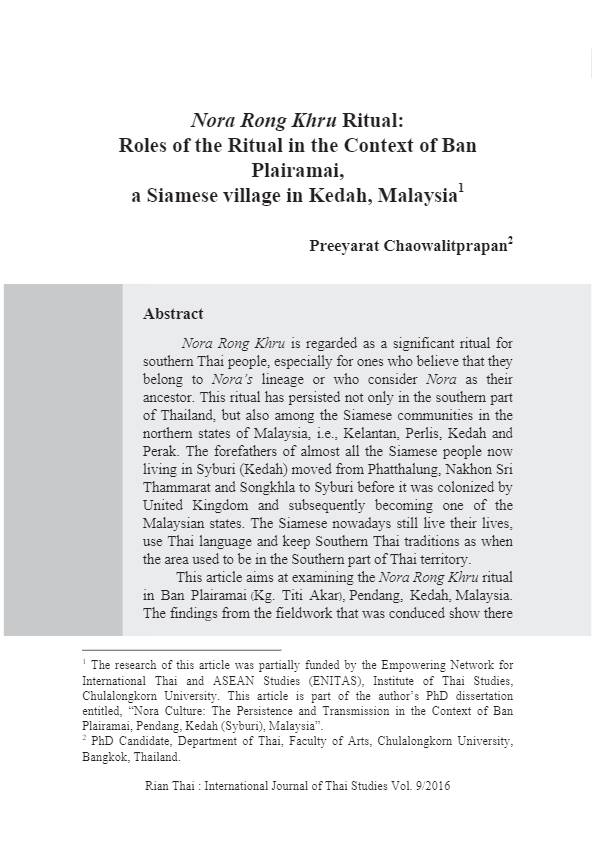