Since 2009, Phra Upakhut midnight almsgiving ritual has also been found in other areas outside the north, such as Prachuap Khiri Khan Province and Nonthaburi Province in central Thailand. This article will then focus on studying the reproduction of this ritual in central Thailand, examining how patterns and details of the ritual vary from the ones originally practiced in the north. When this ritual is reproduced in the new areas, some patterns and details are changed in accordance with central Thai culture. Consequently, Phra Upakhut midnight almsgiving ritual in Prachuap Khiri Khan and Nonthaburi is different from the original ritual practiced in the north. For example, in Prachuap Khiri Khan, the time of the ritual is changed from midnight to early morning. Also, the ordination of novices and their roles in alms collection are added to the ritual when it is held in Nonthaburi.

The phenomenon of the reproduction of Phra Upakhut midnight almsgiving ritual in central Thailand indicates how the socio-cultural context of central Thailand determines the kinds of change in the borrowed northern Thai ritual. In addition, this article will discuss how the contemporary context of tourism and capitalism affects Thai folklore and tradition in the midst of changing Thai society. 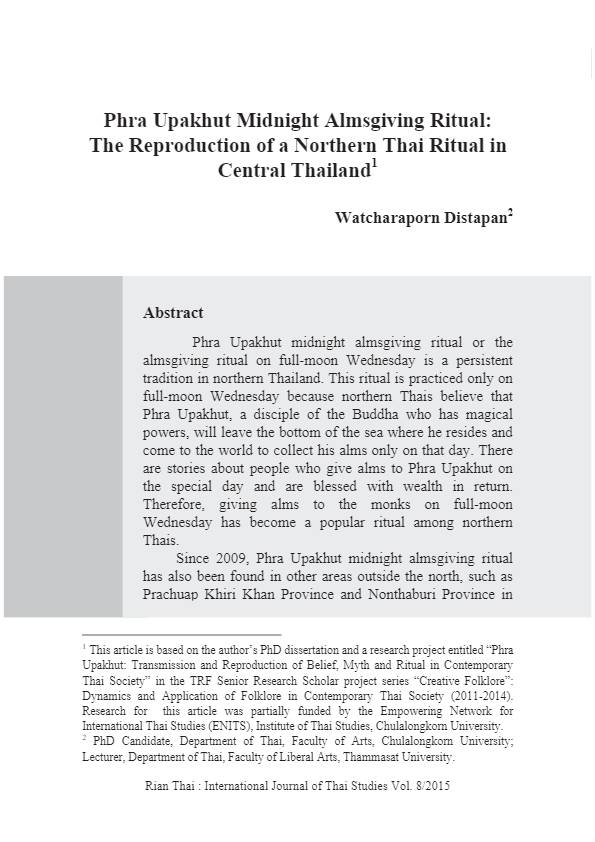