A handful of Thai gender studies academics have noted that the field’s failure to develop a satisfactory episteme of contemporary masculinities is the result of a dominant theoretical approach which has favoured cultural exceptionalism whilst eschewing the frameworks developed in Western academia. This article maintains that this approach – which I argue had been a mainstay of the Thai anthropology of the fifties and sixties and, later, during the intensive research effort of the 1990s AIDS crisis – has resulted in a currently stagnant academic construction of the Thai male as a series of crude stereotypes whose behaviour is rooted in ‘traditional’ cultural values and beliefs.

Drawing on six months ethnographic fieldwork performed in the northern town of Nan during 2012, I argue that Thai gender studies must move beyond the explanatory models of ‘traditional’ Buddhist values and begin to see Thai masculinity as an intensely hybrid and internally contested discourse, the meanings of which are constantly in flux. By analysing the discursive strategies of male members of the Nan municipal fitness centre, I note how individuals are able to reject, appropriate and (re)negotiate dominant idioms and discursive formations of masculinity in a bid to construct their own pragmatic interpretations of legitimate masculine subjectivities. In doing so, these men become implicated in a poly-vocal and power-laden discourse which constantly re-defines ‘Thai masculinity’, thereby interrupting its perceived fixity. Drawing from the works of Foucault and Bhabha, this article will introduce the term ‘hybrid masculinities’ and consider the potential benefits of its application to the established theoretical tools currently employed in the study of gender and identity in contemporary Thai culture. 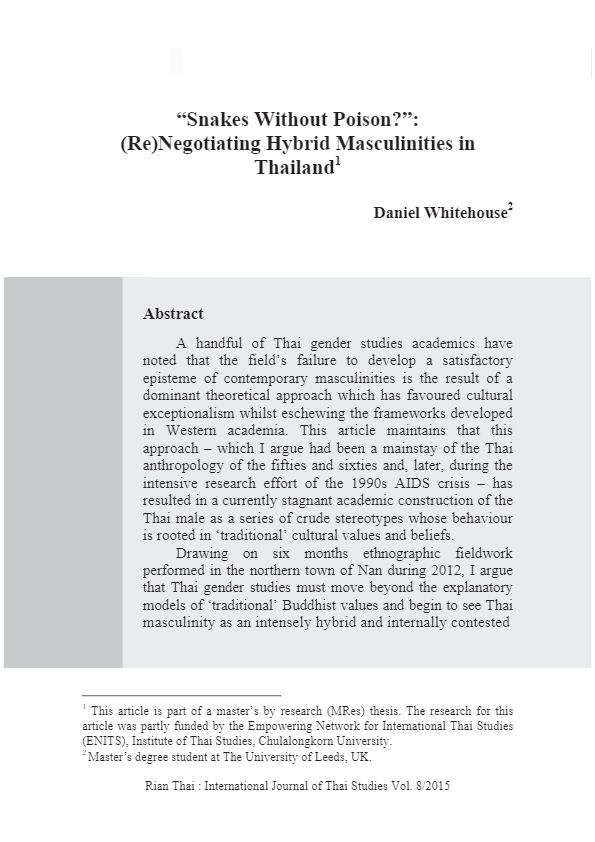