This research studies the dynamic creation of “Thai classical music sacred objects” in the context of contemporary Thai society. Traditionally, Thai musicians perceived certain masks of “teachers” as sacred objects, e.g., masks of Shiva, Vishnu, Brahma Wissunukam, Panja Singkhon, Prakhonthap, or the masks of Rishi Nart and Yaksa Phra Phirap. These are sacred figures in Brahmanism, Hinduism and Buddhism. 1970 was the first time that the Prapiren Temple in Bangkok made sacred coins with the figure of Rishi Nart, which was the beginning of the dynamic creation of a sacred image in the form of a “sacred object.” The Rishi Nart coin was created with a similar concept of votive tablets or amulets. 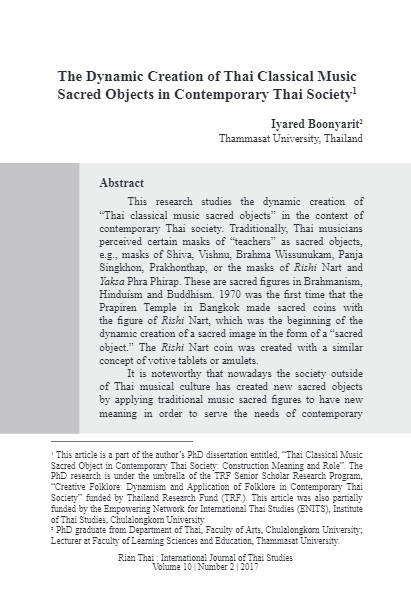