This paper analyzes the role of the younger brother in Ramakien with three characters examined: Phra Lak, Sukhrip,and Phiphek. This study finds that there is common behavior depicted among these three characters with respect to their relationship with their older brothers in terms of four traits: loyalty, obedience, respect and deference. Furthermore, these characters can be classified as 'ideal' because they are depicted never deviating from their younger brother behavior, even when presented the opportunity to stray, and consistently demonstrate all four traits in their relationship with their older brothers. Accordingly, this study concluded that the portrait of an 'ideal' younger brother in Ramakien is one of unwavering loyalty, unquestioned obedience, unshakable respect and unflinching deference toward their older brother.

The findings from this study indicate that an important aspect of traditional Thai society has been the desire to project and uphold the 'ideal', as represented by the behavior shown in younger brother characters in Ramakien and paralleled in the portrayal of the younger brothers in Thai historical narratives. 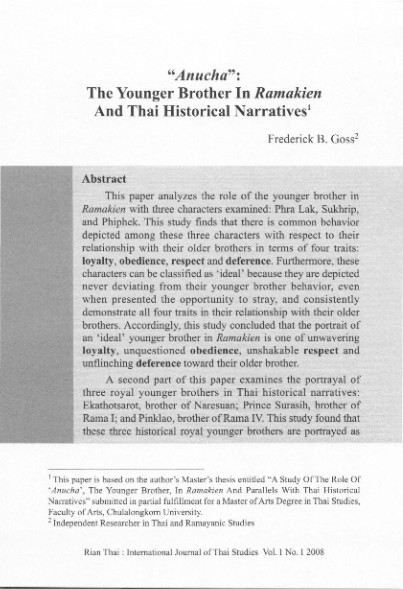