This article aims to study and analyze the convention and invention of Phra Sri An or Maitreya myths in Thai society. In adopting the cult of Phra Sri An, local Thai people variously composed myths both by modifying Buddhist scriptures and by inventing new stories. From this study, it was found that Phra Sri An myths that were derived from Buddhist scripture explained the relations between Gautama Buddha (the present Buddha) and Phra Sri An (the forthcoming Buddha), as well as described more details about Phra Sri An's background and what would happen in his time. Myths that were newly invented in Thai society explained the relation between the two Buddhas, describing the liminal period between the two Buddhas' time, and connected the forthcoming Buddha stories with local places.

The study of Phra Sri An myths in Thai society not only shows a variety of myth invention but also shows a reflection of Thai people's worry about the future, such that they tried to describe the link between the present and the future Buddhas and tried to imagine what would happen in the future. The myths also reflected people's wishes and their preparation for Phra Sri An's utopia. This study also demonstrates Thai people's attitude toward the forthcoming Buddha and various aspects of myth invention. 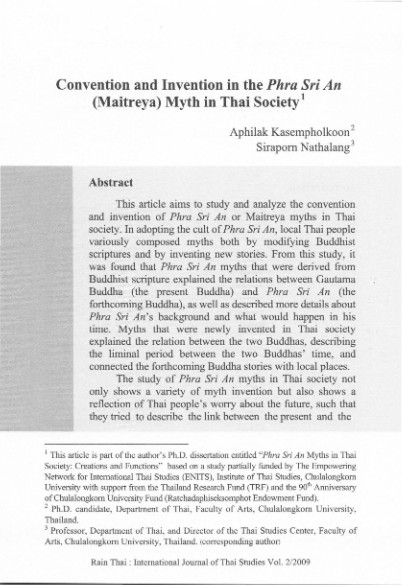