The aim of this essay is to show two systems of thought that developed in different countries and different Buddhist traditions during different periods of time and relying on different scriptural sources, sharing similar views on the nature of absolute reality. These two views are both founded upon a meditative and an intuitive understanding of reality and aim at presenting its nature exactly as it appears to the meditator's awareness.This article is divided into five parts, the first part talks about the tathagatagarbha doctrine, the second about the Tibetan emptiness-of-other (shentong/gzhan stong) tradition and its views, the third talks about thammakai meditation system and its views as taught by Luang Pho Wat Paknam., Phra Mongkhon Thepmuni (Sot Candasaro) หลวงพ่อวัดปากน้ำ พระมงคลเทพมุนี (สด จนฺทสโร) , the fourth part is a doctrinal comparison between the shentong and thammakai systems followed by a brief conclusion.

This essay attempts to raise questions regarding the Buddhist understanding of the nature of reality, the dividing line between wrong and right views and the role of meditative intuition and conceptualization in Buddhist practice. The author hopes that further academic studies on this topic would arrive at a better understanding of the variety, the complexity, and the over-lapping features of Mahayana and Theravada traditions and raise further interests in the academic study of Luang Pho Sot's teaching. 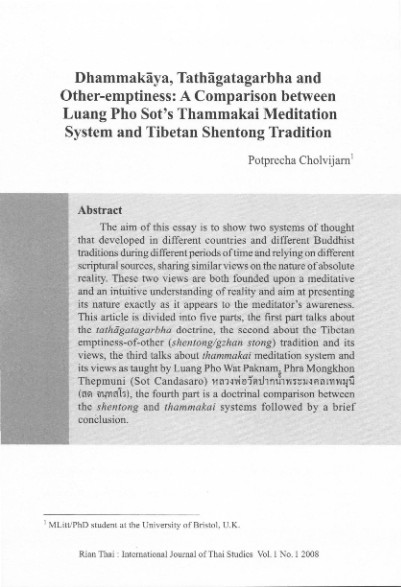