Sema stones, or Buddhist boundary markers as they are commonly known in English, are a well attested phenomenon in the religious landscape of Southeast Asia. In modern day Theravada Buddhism they demarcate the sacred precinct of the ubosot, either in groups of eight or sixteen. The earliest archaeological evidence for these objects dates back to the Dvaravati Period (6th-11th century CE) where they are found at numerous sites and settlements throughout northeast Thailand and central and southern Laos, an area geographically defined as the Khorat Plateau. In scholarship to date, however, explanations regarding the function of Dvaravati sema have largely relied on modem analogies and comparisons and textual sources. Therefore, is it presumed that sema in the Dvaravati period functioned more or less in the same way as they do today, being set up in groups of eight or sixteen to demarcate the ubosot alone. Archaeological and epigraphic evidence, however, paints a somewhat different picture, illustrating that in some cases sema were placed around stupas, Buddha images and rock shelters, and that the numbers used could vary between eight and twenty-four. The epigraphic evidence further illustrates that sema fulfilled important social functions as objects of patronage and merit donated by local elites. Additionally, sema's re-use today in Buddhist contexts illustrates their continual sacred appeal and alternative functions. This article re-evaluates the function, use and definition of Dvaravati sema by drawing on archaeological, textual, epigraphic, typological and contemporary evidence. Finally this article acts as a cautionary tale, highlighting the pitfalls and problems inherent in projecting modem religious beliefs and practice onto the past. 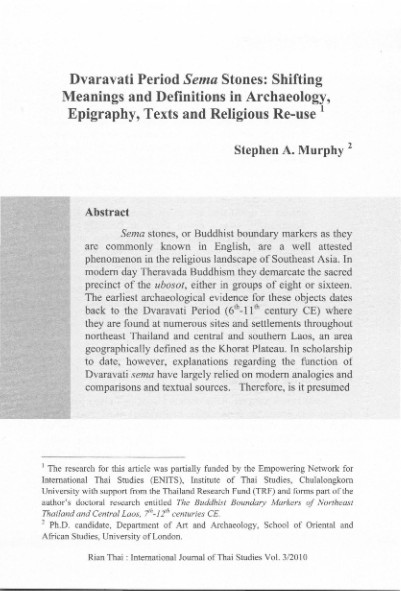