In The Truth in Painting in 1987, Jacques Derrida describes a "discourse on the frame" as "a discourse on the limit between the inside and outside of the art object." Although this definition primarily aims at the visual arts, it could be applied to a Buddhist cosmography and the interplay between the inside and the outside in the depiction of the universe. Focusing on Traiphum Phra Ruang, a Thai Theravada cosmological text, this paper attempts to demonstrate an intriguing design of this text in creating an image of a Buddhist universe. As illustrated in the Traiphum, the Buddhist universe is constructed as an enclosed system in which elements are clearly defined and framed. But since the Traiphum also mentions another hell called the Lokanta hell that is situated "outside" the universe, the image of a clearly defined unit of the universe becomes disrupted. With the presence of the Lokanta hell, the traiphum universe becomes a unit in which the notions of boundary and even the totality of the universe itself are all put in question. 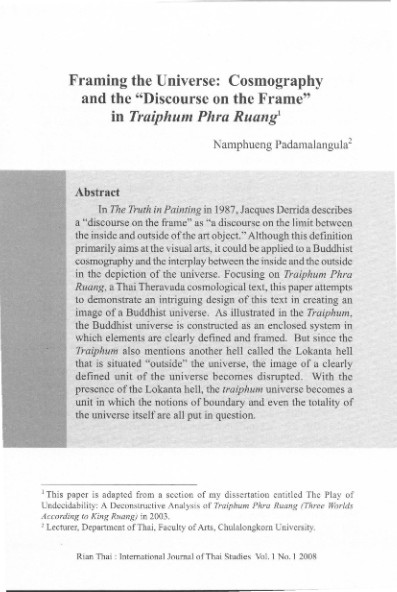