Being inhabited among many other ethnic groups in Arunachal Pradesh, e.g., Singpho, Monpa, Bengali, it is then worth exploring to what extent Khamti Shan have maintained their Shanness in the context of Arunachal Pradesh in India.

This paper provides field data about Khamti Shan Buddhist practices and their way of life, experienced from my short visit to Namsai Village, Lohit District, Arunchal Pradesh, India, in March 2006.

From many villages and temples I visited, certain aspects of Buddhist practice have been observed, e.g., similar architecture of chedi, tiered roof temples, the worship of Uppakutta, the
Sangkaen festival, the Buddhist tradition of poi lu lik (dana Dhamma) in which people offer lik (Buddhist script) to monks for special reasons; certain lik for certain purposes. This paper
provides names of lik and their occasions offered to the monk, which will help us understand how Khamti Shan make use of Buddhism in their worldly life. It is also observed that Khamti Buddhism co-exists with Hinduism and also indigenous beliefs.

Overall, it is fascinating to learn that the Khamti in Arunachal Pradesh retain, to a large extent, their Shanness as if they were still in northern Shan State where they departed a long time ago. 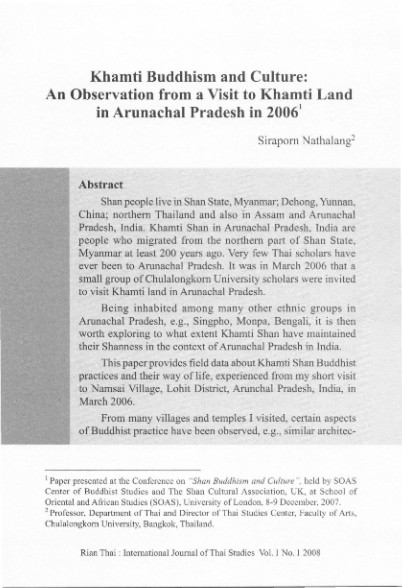