This article illustrates the characteristics of monsters as projected in Thai horror film from 2001 to 2008. A number of Thai horror films combine other genres, such as romance, comedy, and action, with horror as the most popular subgenre in Thailand. Since the early 2000s, Thai horror film has changed to become more variable in narrative style, and monsters in the films are more gruesome, gory, and fearful than in the previous periods due to the influence from other countries, especially Korean, Japanese, and Hong Kong horror films. Monsters that appear in Thai horror films are mostly ghosts, especially female ghosts, even if the ghost is a spirit of a tree, or water, or other things of nature. Monstrous females (whether ghost or human) in Thai horror films portray women's inferior status to men owing to the patriarchal nature of society and women's sexuality being more repressed by social norms based on Thai beliefs, including Buddhism. With regarding to the hypothesis of the monster as a social metaphor, and with respect to the "otherness" of Robin Wood, there are six types of monsters in Thai horror films analyzed in this article women, children, other culture, ethnic groups, homosexuality, and machine and new technology. 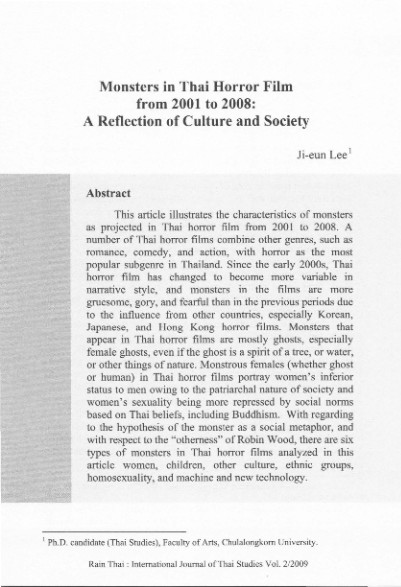