Theravada Buddhism has long been associated with lowland Tai culture. In Thailand, Buddhism is a component of Thai nationalism and the government has actively promoted the propagation of Buddhism amongst ethnic minority groups as a means of assimilating non-Tai people into the Thai national body. Scholars have similarly treated the divide between upland and lowland cultures in part as a division between Buddhism in the lowlands and indigenous spirit and ancestor oriented traditions in the uplands. As upland Theravada Buddhists, the Palaung people have long been noted as an exception, yet today more and more upland groups are converting to Buddhism. In this article I explore the ways in which Buddhism serves as a means of drawing distinctions between the Palaung people of northern Thailand and their lowland Tai neighbours in order to illustrate the way in which the adoption of Buddhism by upland peoples does not necessarily indicate a significant shift in ethnic group identity. 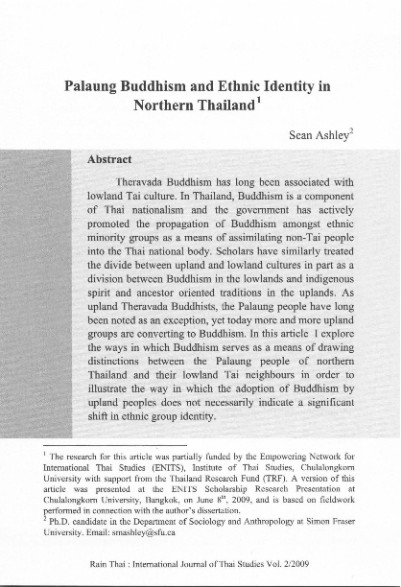