This paper aims to study narratives from the Simhasana Dvatrimsika and Thai Buddhist narratives from the Pannasa Jataka and the Anagatavamsa in which the main characters are the kings who sacrifice their lives. In the Simhasana Dvatrimsika, regarded as a eulogy of King Vikramaditya, one of the greatest heroes of India, he is characterized as a highly generous king who gives everything for the sake of others. In ten out of thirty-two stories, the king sacrifices his life in order to satisfy the deities, to help others, and to save others' lives. In Thai Buddhist narratives: the Pannasa Jataka and the Anagatavamsa, the self-sacrifice of kings is also found. However, it is not intended to prove his righteousness as a king per se, but to demonstrate the highest level of the perfection of generosity. In the Panniisa Jiitaka, there are four stories in which the king bodhisattva sacrifices his body and life with devotion and compassion to Sakka who comes in disguise to test him by begging for parts of body, or by asking for his body as an offering to a sermon. Also, in the Anagatavamsa, there are two stories in which the king bodhisattvas devoutly cut off their heads as offerings to the sermons of the Buddhas.

From the study, the self-sacrifice of the kings in the Simhasana Dvatrimsika and Thai Buddhist narratives seem to be approximately similar; the kings are tested and then sacrifice their lives to the deities, or they liberally sacrifice themselves for the sake of others. But actually, the concept and purpose of such sacrifice are distinctly different. In the Simhasana Dvatrimsika, the liberality of King Vikramaditya is woven with devotion, honesty and courage. These inspiring virtues prove him to be an ideal king in the "Hindu" context. In the Buddhist context, meanwhile, the self-sacrifice of a king is merged with the concept of Danaparami – the perfection of generosity. Through the sacrifice, the bodhisattvas renounce kingship and completely become a 'qualified' bodhisattva who fulfils the Danaparami. Buddhahood is the otherworldly goal for him not the worldly pleasures or the ephemeral status of a king. 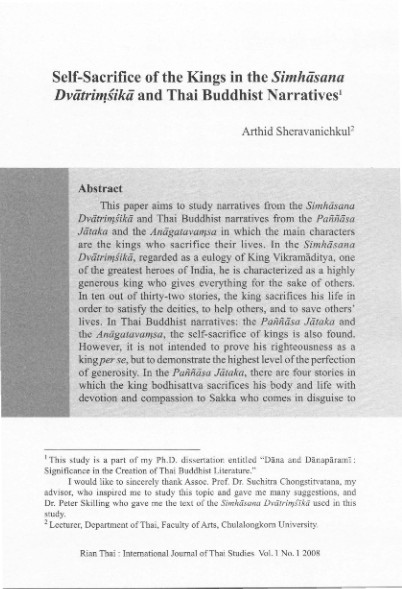