Sacral kingship in Thai Buddhism has been a topic of many scholarly tomes that draw mainly upon the scriptural myth of the world conqueror king and the history of central Thai (Tai) kingdoms. Because of a bias in the sources, an elitist monarchial view of Buddhist kingship emerges from these works. It is presumed that the religious were nothing but devoted loyal subjects of historical kings. However, there have been historical periods and places in which Buddhists expressed discontent over kings. In the northern Thai (Tai) principalities from the nineteenth to mid-twentieth centuries, we fmd prophetic literature a vision of a dystopic world, not ordered, but thrown into social and political chaos and profoundly immoral. Traditionally, the righteous ruler maintained the social and moral order. Order depended upon the king to live up to the moral paradigm of Buddhist kingship. However, Buddhist prophetic writings speak about the chaotic world that emerges under the leadership of failed evil kings. In my approach to prophetic literature, I examine the concept of the bad king and the consequences of such a sovereign as conveyed in some of the writings from this literary genre. Through an examination of chaos and un-ideal kings, I seek to refine our notion of what the ideal king meant to Buddhists. 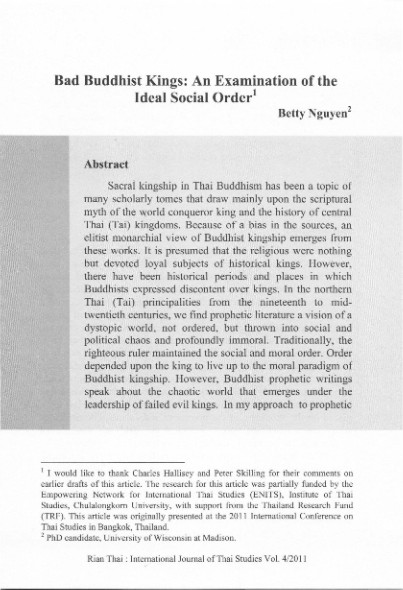