This article studies regional changes in an era when British Colonialism in the Malay Archipelago met an increasingly assimilative Siamese Government under King Rama V (Chulalongkorn). In this article, I am suggesting a new framework – to connect the Southern Siamese states of Songkhla, Trang and Phuket with the Northern Malay States of Setul, Kedah and Perlis via the British commercial hub of Penang. If national history has a propensity to tell the history of Thailand and Malaysia separately, the approach that I am suggesting is to look at regional and local history in terms of inter-connectivity of the British, Siamese, Chinese and the Malays. In the 19th century, the geographical position of Southern Siam and Northern British Malaya created a unique flux of political, economic and socio linkages. I argue these linkages can be explained via three perspectives – 1) the formation of regional business and economic networks, 2) trans-border political loyalty, and 3) a shared social-cultural affiliation. Given that local studies of Penang and Phuket are rare, this comparative study of both areas will contribute significantly to the research on Southern Thailand and its linkages to the central power-base of Bangkok. Moreover, the Phuket-Penang connection is among the least-explored themes of Thai-Malaysian history and a warrants well-deserved other look. 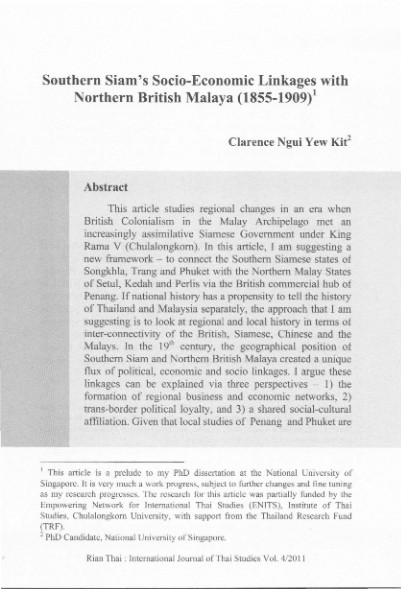