Under an emergence of the new world order by the nineteenth century, the world was dominated by the Western world economy and Imperialism. With an increasing demand and high competition, Southeast Asia was forced either by military force or diplomatic strategy to be under European occupation. In the case of Siam, the government under King Mongkut and King Chulalongkorn was able to change this threat to become ‘a great chance’. Because of closer commercial relations and for political reasons, Singapore and Batavia became models for transforming Bangkok at the earlier period of modernization. To fit ‘an international standard’, both kings adopted a form of modernity from Singapore and Batavia to transform Bangkok to be similar to a European-like city. The transformation not only had an impact on the physical change to a new form, but people were able to conform to a modern standard of living as well. ‘Bangkok Modern’, during that time, followed a standard of beauty-hygiene order, with a similar standard as European-like cities such as Singapore and Batavia.

This article examines how Bangkok was initially reconstructed with the concept of a modern city. In particular, after visiting Singapore and Java (Batavia and Semarang) in 1871, King Chulalongkorn adopted a form of ‘modernity’ from both colonial cities to transform Bangkok during the earlier years of his reign. 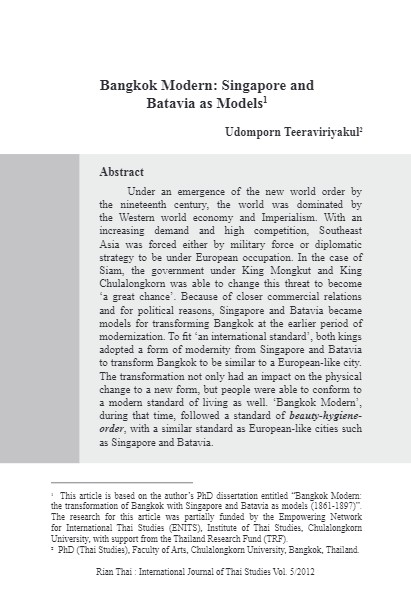