As a response to the discourse that identifies monks as a root cause of the degeneration of Buddhism, the Thai Sangha has generated a counter-discourse of Buddhism Protection that tells the story of a weakened Buddhist society under threat from the subversive activities of foreign faiths. The discourse has been mainly publicized through the activism of the Sangha’s new movement – The Buddhism Protection Center of Thailand (BCT). An analysis of Buddhism protection discourse reveals an underlying cognitive frame that attempts to shape the mind of the Sangha and public audiences to spot injustice done to Buddhism by malevolent non-believers and an ignorant liberal state. The framing of religious injustice has ignited an ethno-nationalist sentiment, calling for collective action from Thai Buddhists in the re-nationalization of Buddhism. 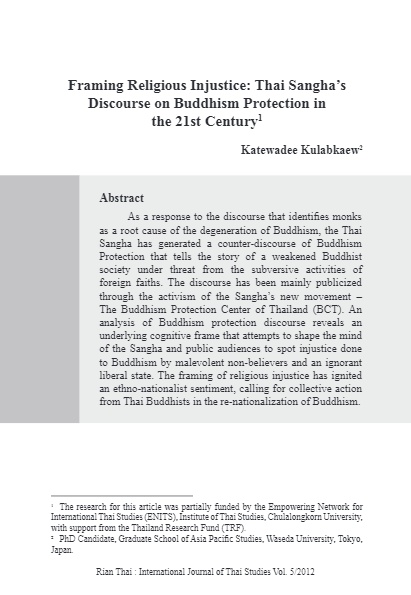