This article explores the way early modern statemaking conquered the space of the Mekong valley. The main aim of the article is to re-construct the transformation of the political landscape in the region through the impact of Siamese and Vietnamese centralized expansion in the time of Rama III and Minh Mạng. I shall take the increasing body of geographies of knowledge and extending infrastructure of state-building as my point of departure to unfold the move of new politico-economic institution into this complex terrain and autonomous marginal space. I argue that the Mekong basin of the eighteenth century margins and ambiguous political identification was administratively turned into “territory” of the early nineteenth century centralized state. As a result, the state-making project fundamentally transformed the political structure of the region. Unlike in the eighteenth century when the state moved toward people and economic centers, early nineteenth century witnessed various forms by which people voluntarily, or were forced, to move along with state establishment. Centers had been mapped and the state administrative network paved the way for reorganizing the political structure of the region, paralleled by both Siamese and Vietnamese nation-building. By looking at the Siamese and Vietnamese expansion along the Mekong basin, not from the perspective of confrontation, but in the context of power transformation throughout the basin, a convergence between them can be drawn: that is, the extensive expansion of the state into mountains, hills, and swamps by creating canals, routes, military fortresses and by collecting immigrants at the frontier to set up settlements and administrative networks. The state conquest into the periphery and semi-periphery was in a larger scale than ever before and created a fundamental transformation from the “periphery” into the “geobody” of the central state. 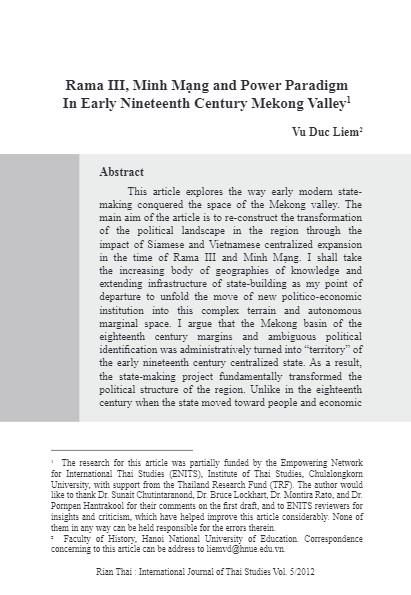