This research aims to present a critical analysis of important features in the political economy of Thailand from 1958 to 2006 based on the Peter Evan’s concept of “embedded autonomy,” referring to an autonomous state that has an intimate network with certain private sectors. This article will first look at different perspectives explaining the role of the Thai state, and then argue the theoretical usefulness of the notion of ‘embedded autonomy’ in the analysis of the dynamics of the political economy of Thailand. To do so, this article focuses on the changes in relations of the state’s macroeconomic institutions, such as the Bank of Thailand and the Ministry of Finance, and major commercial banks. Thailand experienced high economic performance during the 1960-1980s despite the corrupted relationship between the military, civilian bureaucrats and capitalists. The Thai state’s “bifurcated” features between clientelistic microeconomic management located in line ministries and autonomous and insulated macroeconomic management agencies, such as the Ministry of Finance and the Bank of Thailand, contributed to economic growth. The article then compares how the embedded autonomy of the Thai state has eroded after the democratization, especially after the tycoon-cum-politician Thaksin became the Prime Minister, with previous eras in the context of specific features of the political economy. This research will present the importance of embedded autonomy of the state based on the regulatory discipline to domestic capital in developing countries to overcome stable economic growth and politics. 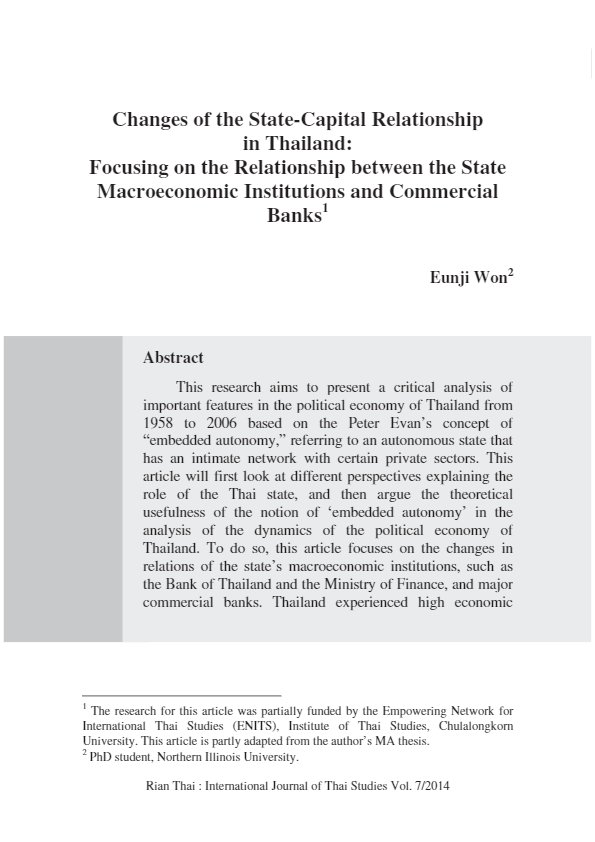