From bookstores to television, on the posters hanging in coffee shops and printed on t-shirts, meditation is everywhere in Thailand. Long considered an esoteric practice among ascetics, meditation is now celebrated as a technique to cultivate a “better you” and centrally featured in a nascent religious renewal that sees the rise in mindfulness meditation, active lay mobilization, proliferation of meditation centers and retreats, and thriving religious media economies. In order to examine such aspects critically, the objective of this article is twofold: first, I propose that these developments be considered in a larger historical context connected to the formation of modern state Buddhism, different waves of religious reform and shifting political-economic forces. In doing so, I hope to show the background as to why mass meditation is an important arena where religious change and its social and political impact could be studied. Second, I suggest that lay Buddhist associations (LBAs) represent a location from which the spread of meditation can be concretely explored, not the least due to their role in organizing religious learning and formulating innovative cultural practices aimed at cultivating ethical subjectivity of Buddhist masses. The profiles of two prominent institutions, Young Buddhist Association of Thailand and Buddhadasa Indapanno Archives, are presented to illustrate the significance that LBAs have in the current meditation trafficking. Studying these sites, I argue, presents a unique opportunity to see mass meditation from a standpoint that has by far received little scholarly attention. 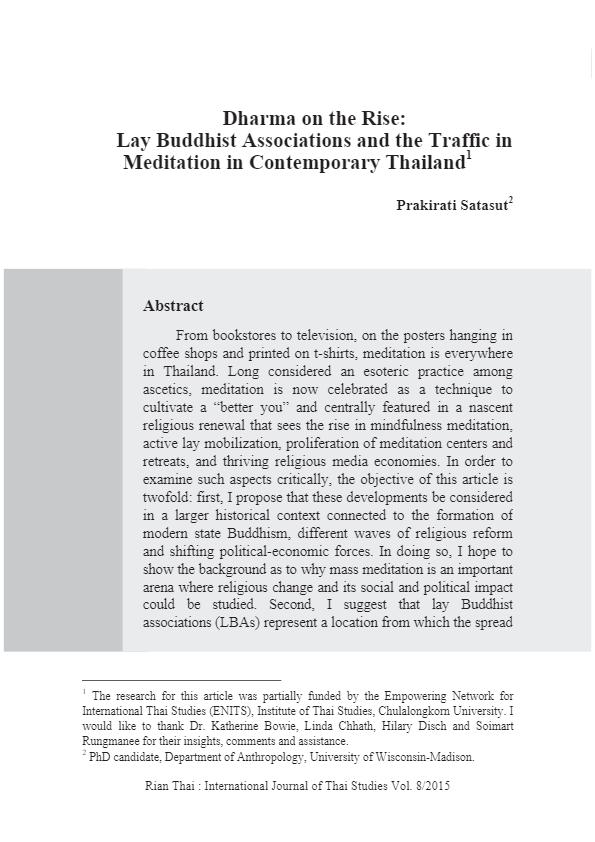