This article explores the interplay of footloose gem traders, gem trade operations and the making of a ‘space of exception’ in the border town of Mae Sai between Thailand and Myanmar. Chanthaburi gem traders are considered footloose traders because once the traders had depleted the gem-fields in Chanthaburi Province of Eastern Thailand, they then moved close to Mae Sai in northernmost Thailand, which shares a border with Myanmar, to buy gemstones from Myanmar. After that, they eventually moved across borders and continents to Madagascar in Africa. The operation of the gem trade has thus formed out of heterogeneous networks that have spanned across different time-space and includes traders, brokers, ethnic groups and manufacturers. The gem trade in particular involves the making of a ‘space of exception’ in which the Thai state had been more flexible in its surveillance of Mae Sai border space. Subsequently, the ‘space of exception’ could tap the large amount of gem flows from the Myanmar hinterland by containing its ethnic gem caravans in a restricted space. This space also conferred privileges onto Chanthaburi gem traders. The gem trade was a major economic activity of Mae Sai in 1993-2003, and, in particular, during its heyday from 1995-1996. 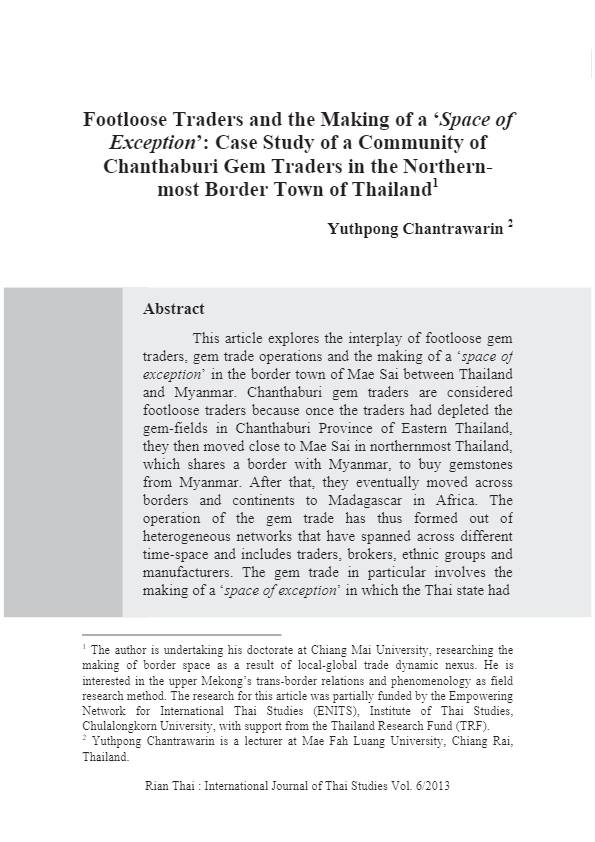