Rediffusion (Song Siang Thang Sai [ส่งเสียงทางสาย] in Thai, or Lide Husheng in Chinese) was the sole wire-transmitted radio station in Thailand that legally broadcasted in the Chinese language. Established in the UK in 1928, known as Broadcast Relay Services, Rediffusion came to the British colonies, Hong Kong, Singapore and Malaya, in the late 1940s. In the postwar period, Rediffusion was introduced to Thailand where huge Chinese communities lived. Rediffusion had a variety of programmes including news and entertainment, yet depended considerably on music and drama. This article aims to examine the making of Rediffusion in Thailand and its features. This article argues that the making of Rediffusion was primarily based on political concerns. As a state-controlled semi-private enterprise, Thai Rediffusion Company worked closely with the government. Rediffusion, however, seems to have played a crucial role, both social and cultural. During the cold war, Rediffusion became a channel for the Chinese in Thailand to maintain ties with Chinese agencies, Hong Kong and Taiwan, and other Chinese communities in Southeast Asia, when connection with the PRC was discouraged. 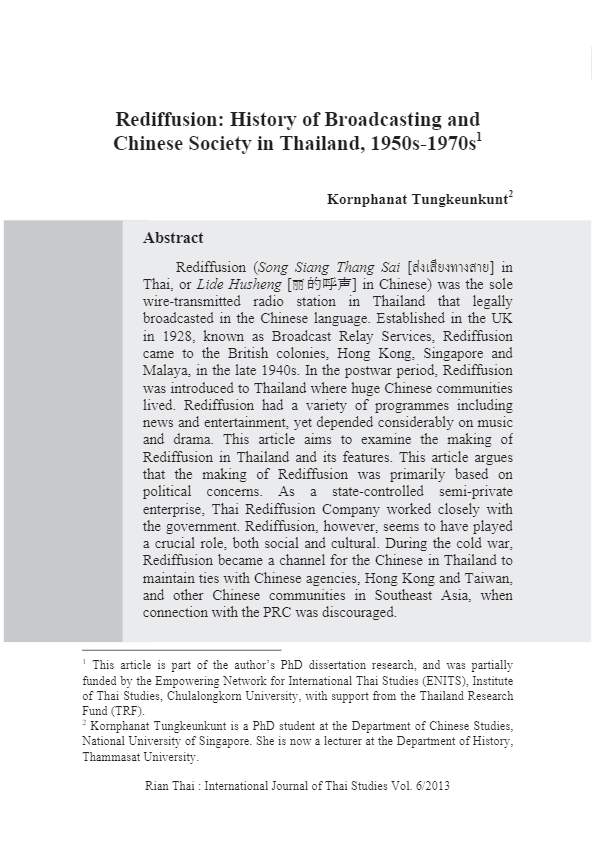