Various scholars, including Nadine Dalsheimer and Pierre-Yves Manguin, have discussed the possible presence of a pan-Southeast Asian influence that took place before a local artistic language developed in relation to Hindu and Buddhist art. The focus of these various scholars have primarily been on mainland Southeast Asia or on Visnu images, thus early images of the Bodhisattva Avalokitesvara have not met with the same scrutiny.

The Thai-Malay peninsula, as well as western Indonesia, has yielded a number of Avalokite􀄞vara images in stone, metal and clay. The earliest form of Avalokite􀄞vara in Southeast Asia is a standing form that is spread along the coast in the western part of Southeast Asia (Thai-Malay Peninsula and Sumatra), with the Thai Isthmus playing a crucial role in the spread of an iconographic type. This article examines whether there is a second group of early Avalokitesvara images that connects peninsular Thailand with the Dvaravati region, as well as with Java. Through my work I hope to determine whether there are any iconographic or stylistic features that are specific to early Avalokitesvara images from peninsular Thailand. Dr Chutiwongs and Dr Chirapravati have both touched on this subject in their respective PhD dissertations; however, by comparing the images found in peninsular Thailand to those from the rest of insular Southeast Asia, I hope to be able to establish a time-line for how the production of Avalokitesvara images developed in this area. 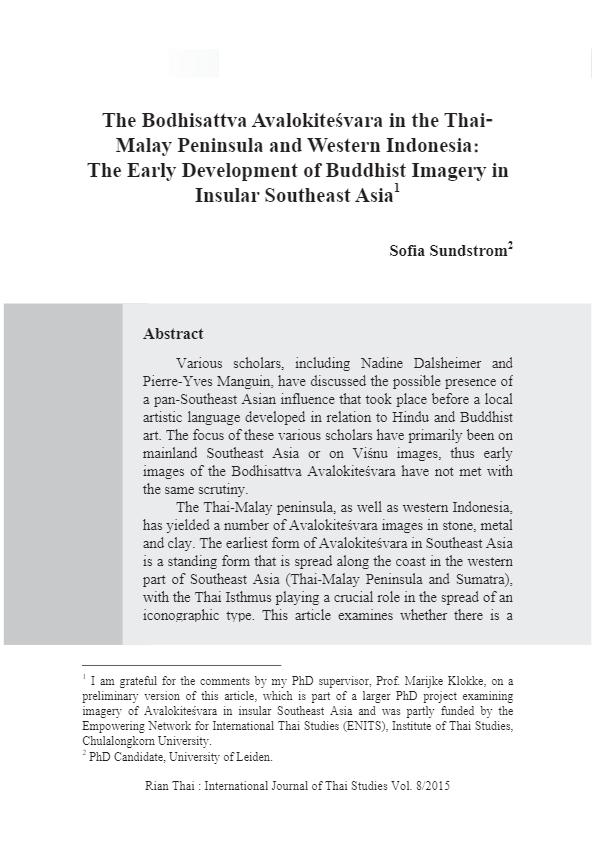