At the heart of Buddhism is the social-moral imperative to alleviate the suffering of all beings. But the notion of a socially engaged Buddhist rests on precarious grounds. Buddhist philosophy contends that human individuals do not really exist – the human person is just a fabrication of the mind. Buddhist spiritual practices, meanwhile, convey direct experience of the illusoriness of individual persons (including oneself) and emphasize detachment from worldly involvements. How, then, can a Buddhist ease the suffering of other persons if he has renounced ownership of his own self – either through withdrawal into monastic life or blind allegiance to an external agency (e.g., a political institution)?

This article responds to this puzzle by first examining how Buddhist selflessness is not just a theoretical problem, but a practical one as well: the article considers the social-moral and political problems associated with the Buddhist philosophy of activism of D. T. Suzuki, one of the leading voices of socially engaged Buddhism who used Buddhism in order to rally support for the purposes of a morally corrupt Japanese Empire. The article then analyses the influence of Suzuki upon the 20th century Thai Buddhist philosopher, Buddhadasa, and poses the question: is Buddhadasa’s version of socially engaged Buddhism subject to the same criticisms as Suzuki’s call to action? Finally, the article examines key differences between the meditation practices of Suzuki and Buddhadasa, and argues that anapanasati (the form of mental cultivation taught by Buddhadasa) develops certain aesthetic virtues (e.g., loving kindness or metta) that (a) get over-looked in zazen (emphasized by Suzuki) and (b) enable the practitioner to become an agent of social change who positively, yet selflessly,  attends to the needs of others. 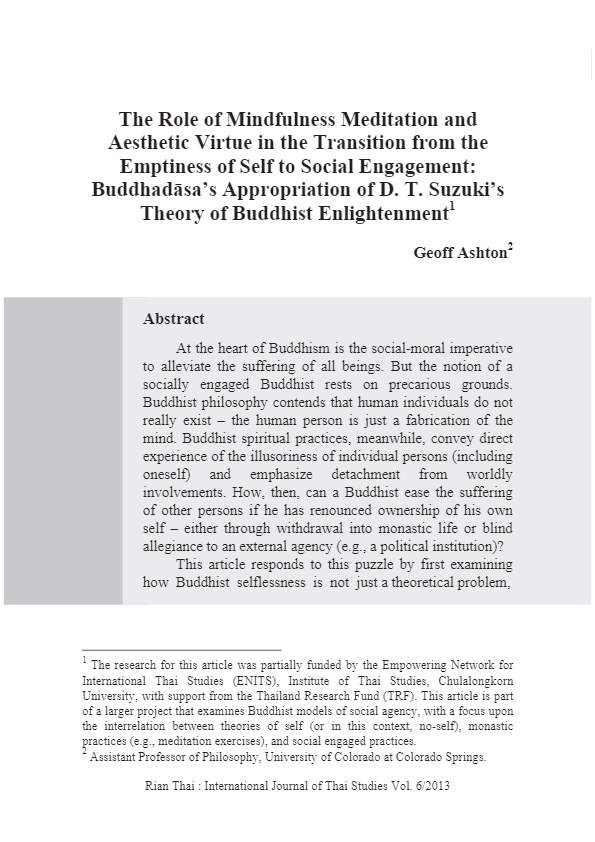