One of the outstanding images of Bangkok represented in official tourist guides is as a “Buddhist City”. Such images indicate the status of Bangkok as the centre of Thai civilization in the modern period. This study attempts to explore the concept of “Civilized Bangkok” from official tourist guides published by the state and state enterprises of Thailand from 1998 until 2013 under the promotion of the “Amazing Thailand” campaign in order to identify images of Bangkok as a “Buddhist City” and analyse the construction and representation of “Civilized Bangkok” based on the data sources.

The study reveals that the oldest image represented in official tourist guides and foreign travel writings is that Bangkok is a “Buddhist City” as there are Buddhist practices, Buddhist art and creation of a Buddhist cityscape. Bangkok is the continuation of the Buddhist civilization and the centre of Buddhism in Thailand and Southeast Asia. In this image, the relevant concepts of an “exotic city”, “the land of smiles”, “a sacred city” and “the city of pilgrims” have been constructed through the process of representation. The outstanding characteristics of Bangkok’s Buddhist attractions are that of being the epitome of “Thainess” in aspects of beauty, faith and knowledge. Such characteristics have been constructed from the preservation of the old Buddhist cityscape, the creation of Buddhist state temples and Buddha images, the status of the city as the centre of Buddhism in Thailand and Southeast Asia, and the integration of art and science in Buddhist monasteries. 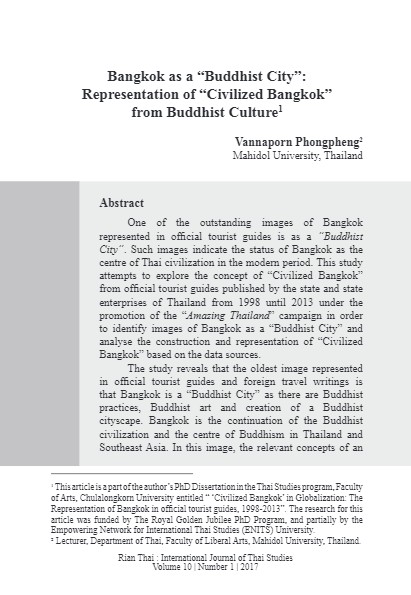