Recently in Thailand, the story of Queen Camadevi has been revived and remembered in several provinces. Queen Camadevi, who is a legendary heroine, ruled the Haripunjaya Kingdom during the 7th-8th centuries, and some provinces regularly observe “Camadevi worship” ceremony today. Historically, Thai people have recognized Queen Camadevi as the Queen of Haripunjaya, an ancient kingdom situated in Lamphun province in northern Thailand. Interestingly, only a few years ago, there has been a phenomenon of several other provinces also beginning to hold “Camadevi Worship” ceremonies, namely Chiang Mai, Phrae, Nan and even Lopburi in central Thailand. The local people living in these provinces explain that their province also has a unique relationship with the queen and are mentioned in the Camadevi Chronicle, particularly regarding Queen Camadevi’s journey from Lopburi to rule the Haripunjaya Kingdom in Lamphun. 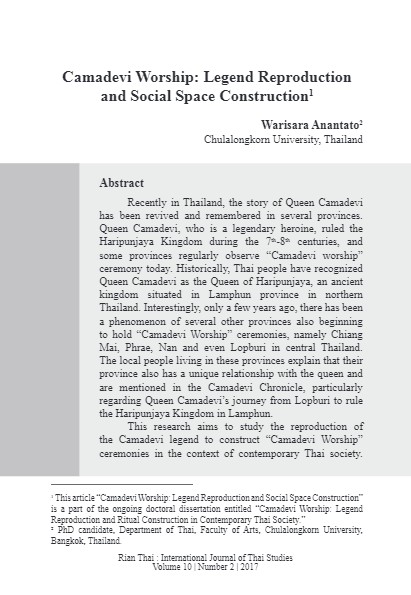