Teenage sexual activity and the negative consequences of unsafe sex have received public attention in Thailand. Most research to date conceptualizes premarital sexual activities as risky behavior and reflects a hegemonic discourse that disapproves of the sexual activity of teenage girls. Despite the large body of research on sexual behavior of Thai teenagers, little is known about the ways in which teenagers engage in what is conceptualized as risky behavior. Therefore, the author sees the need to research the topic from the teenager’s perspective. Hormones, The Series is acclaimed as a TV series that explicitly portrays teenage life as lived by Thai youth today and includes counter-hegemonic representations of sexually active youth. This research project aims at analyzing the series through the lens of youth as a cultural construct, with a focus on intersections with Thai social constructs of gender roles and feminine sexuality. Textual analysis is employed to analyze the depiction of the main female protagonists. The author comes to the conclusion that seemingly counterhegemonic representations of sexually active teenage girls in Hormones, The Series still favor moralizing messages about feminity and teenage sex. The representations of female adolescents in the series can be conceptualized as part of a cultural discourse on adolescence that carries larger societal implications. The research discusses the implications of a hegemonic discourse of sexual innocence imposed on teenage girls in a social reality where a large proportion of the teenage population is engaged in an activity that is labeled as deviant. 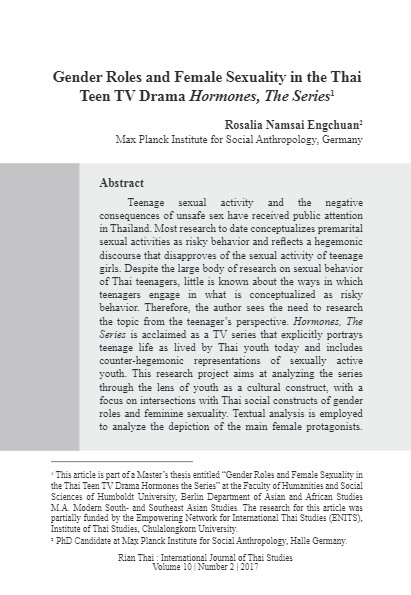