The Rama story, known as the Ramayana in India, its place of origin, and Ramakien in a Thai context, is a literary work that has had a deep and complex association with Thai identified societies for centuries. The Rama narrative has been widely represented in Thai culture in the form of literature, performance and visual depiction. Through a study of the Rama story as used on black and gold lacquerware cabinets designed to hold the sacred Buddhist scriptures, one of the many forms of depiction in a Thai context of this narrative, this study found that the Rama story appears to have been used in a symbolic manner on the lacquerware cabinets to create the presence of Rama (Phra Ram). This is in order to convey the message of Rama acting, either in association or conjunction with the king, as the protector and guardian of Buddhism. Along with this symbolic meaning, one could also read a didactic message in the depictions of the Thai Rama story, that being to convey a lesson of the triumph of good / truth over evil / ignorance. 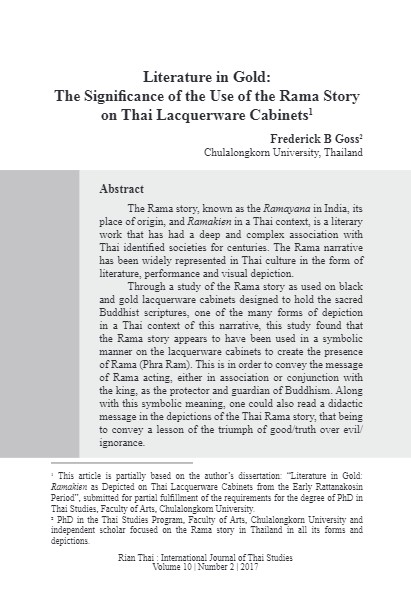