This article examines a late eighteenth-century innovation in the composition and revision of dynastic chronicles in the Thai language. In chronicles and chronicle passages composed at this time,  internally-diverse political networks – the subjects or armies of one monarch or another – are regularly identified as single ethnic groups as never before. This transition is traced through three periods of chronicle (re)writing. Compositions from the Ayutthaya period (1351-1767) focus overwhelmingly on the actions of specific individuals. The diverse population, army, and nobility of a kingdom are not endowed with a single ethnopolitical identification, and are not allowed important roles in the narratives as corporate entities. In extant chronicle texts from this period, the ethnic term “Thai” does not appear at all. In chronicle narratives of the late eighteenth century, however, we can see the tentative introduction of the ethnic term “Thai” as one of the two communities supporting King Taksin (r. 1767-1782) along with “Chinese”, and a dramatic trend towards the ethno-political identification of the armies from the Irrawaddy valley kingdoms as “Burmese”. Finally, beginning in the last decade or so of the eighteenth century, the diverse peoples and armies of Bangkok were glossed frequently as “Thai”, and even the peoples of Bangkok’s tributary kingdoms were assigned ethno-political identities that distinguished them socially and politically from the “Thai” in Bangkok. In late eighteenth and nineteenth century chronicle compositions, the politicization of ethnonyms facilitated the narration of a chronic history of aggression and deceit not just between certain newly-ethnicized kingdoms, but also between their newly distinguishable sets of officials and subjects. Early twentieth-century historians, in turn, drew from these ethnicized royal chronicle narratives to craft a nation-centered history for modern Thailand. Indeed, the political circumstances that motivated lateeighteenth century chroniclers to promote loyalty to the crown through the repetition of ethnicized us-versus-them narratives of history remain powerful even today. 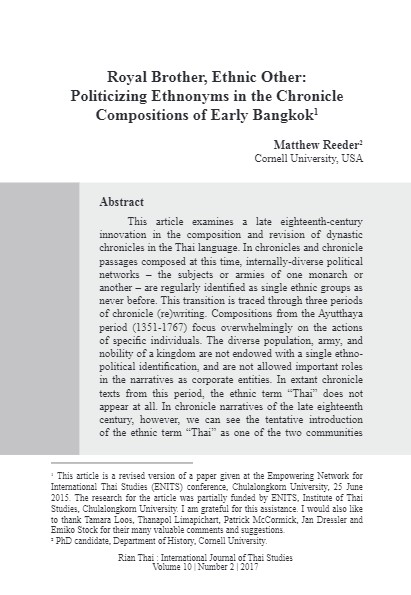