This study aims to examine the influence of the foreign settlers on the education sector in Phuket and also to analyze the significant changes and consequences in the education sector caused by foreign settlers who have resided in Phuket in two key periods – the mining era in the 19th century and the tourism industry period in the last decade. The significant changes in the education sector of Phuket show that a large number of foreign settlers residing on the island have generated an interesting impact starting from the tin mining industry period throughout the tourism industry period. The establishment of Chinese schools during the tin mining industry period was the means not only to provide education for Chinese children, but also to maintain Chinese traditions and culture. In the era of tourism industry, Western settlers have influenced the society of Phuket to become more internationalized through an increasing number of international schools. The opportunity to acquire bi-lingual language ability tends to increase status and standards for parents and their children. Internationalization has become one of the major characteristics of Phuket via the education sector. 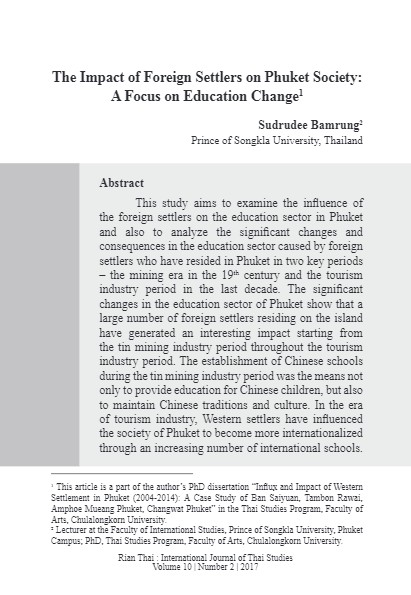