The aim of this research is to study the relationship of language and politics and focus particularly on the influential role of the foreign loan word “development” on the meaning and practice of Thai foreign policy since 1950, along with the way in which Thai elites adopt and localize words into Thai political culture through the contestation of interest groups, as well as the process of foreign policymaking and practices.

This research found that the Western word “development” played a significant role in constructing a new dominant set of truth or discourse and controlled the political environment in Thailand, which facilitated the United States in the conduct of their political and economic foreign policy in Thailand. “Development”, coined as “phatthanakan” in Thai, restructured not only the existing Thai meaning of development, but also domestic and foreign policy in line with American foreign policy and interests. Through domestic localization, this powerful conceptual word gradually was exported from Thailand with characteristics that sounded more Thai and became one of the most significant foreign policy of Thailand. Language is, therefore, a new facet to study Thai foreign policy in relation to the outside world. 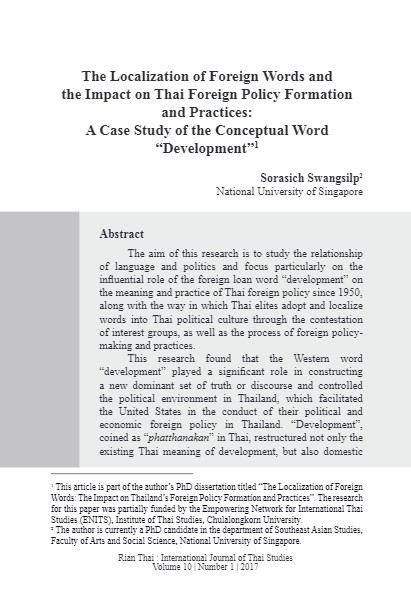