This article analyzes the frequently revisited Thai filmic myth, Khu Karma (“star-crossed lovers”), in terms of genre memory and the politics of adaptation, with special reference to Sun & Sunrise (dir. Leo Kittikorn Liaosirikun, 2013). Since the launch of the film, Sun & Sunrise has faced a tremendous negative reception from devotees of the novel on which it was loosely based. They have complained that the new film has abandoned the conventional historicity of the “Khu Karma” myth to which previous adaptations were faithful. Sun & Sunrise retold the story as a teenpic, including many common features of that genre. By tailoring it to suchgenre, the film implies a relationship between marketing and the Thai star industry. However, Kittikorn’s Sun & Sunrise also exemplifies a capacity to combine a war film and a teenpic while making space for the triumph of the director’s signature theme: the ties between teenagers and violence. 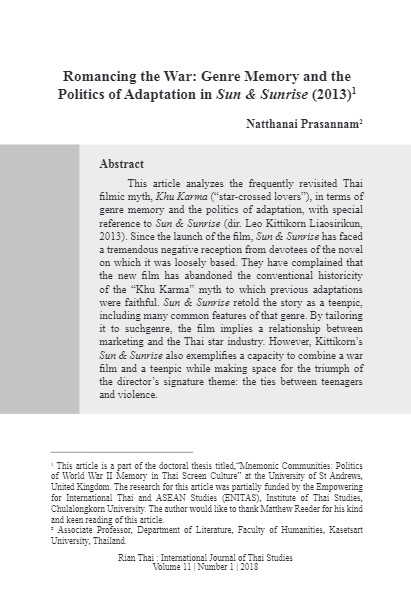